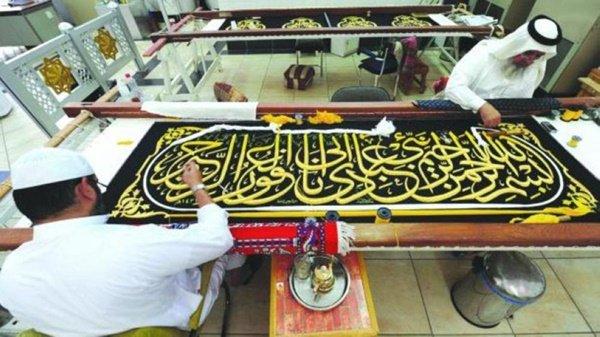 Makkah’s Kiswa factory: The past and present

THE kiswa factory in Makkah was established around 90 years ago. Until then the embroidered black garment that covers the Holy Kaaba used to be made abroad in countries like Egypt and brought over to the Kingdom.

After King Abdulaziz took over the control of the Hijaz region, he ordered the establishment of a kiswa factory in Makkah. At first the factory, which was established in 1926, was located in the Ajyad neighborhood close to the Grand Mosque, then it was moved to Al-Tayseer and later to its current location in Umm Al-Joud district. King Abdul Aziz had brought the most brilliant artisans available at the time to work in the factory.

Dr. Muhammad Bajoada, director of the factory, says the highest quality of silk, cotton, silver and gold threads are used to make the kiswa. The materials for sewing the kiswa are mostly brought from outside the Arabian Peninsula. The silk threads are dyed black and green. The exterior of the kiswa is sewn using black thread while green thread is used for the opposite side. There have been red, green or white coverings in previous centuries, but now it is all black. The new kiswa is normally ready two months before the Hajj.

A kiswa consumes about 700 kg of silk and 120 kg of gold and silver threads. It is made of 47 pieces of cloth, each piece 14 meters long and 101 cm wide. The kiswa is fixed to the ground around the Kaaba with copper rings. The process of embroidery takes around 8 to 10 months and is executed by embroiders who are highly creative and skillful.

The final stage involves inspection of all measurements, sizes and dimensions to ensure they are accurate and perfectly fit the Kaaba. As a custom, the kiswa is handed over to the keeper of the Kaaba, who is a member of the Bani Shaiba family, at the beginning of the pilgrimage.

The event, on the Day of Tarwiya on the 8th of Dhul Hijjah, is marked by a joyful celebration. It is then brought to the Grand Mosque the following day for the kiswa changing ceremony, which starts after Fajr prayer and continues until Asr. The ceremony takes place on Dul Hijjah 9 when the pilgrims assemble in the plains of Arafat at the peak of the Hajj pilgrimage. At the end of Hajj, the old kiswa is cut up into pieces and distributed to dignitaries and religious organizations. “One of the major challenges for us is the pilgrims who tear pieces of the kiswa with their hands or sharp objects, so every hour we have a maintenance team to repair the damage,” Bajoada said. The factory sends embroiders and sewers to the Grand Mosque who work in shifts to fix the torn or damaged parts of the cloth, he said.

The kiswa, which is the most important ornament that adorns the House of God, is produced by some of the best calligraphers and artisans. Nearly 250 people, all of them from Makkah, work in the factory’s different sections. The factory has the world’s largest computerized sewing machine, which has a length of 16 meters.