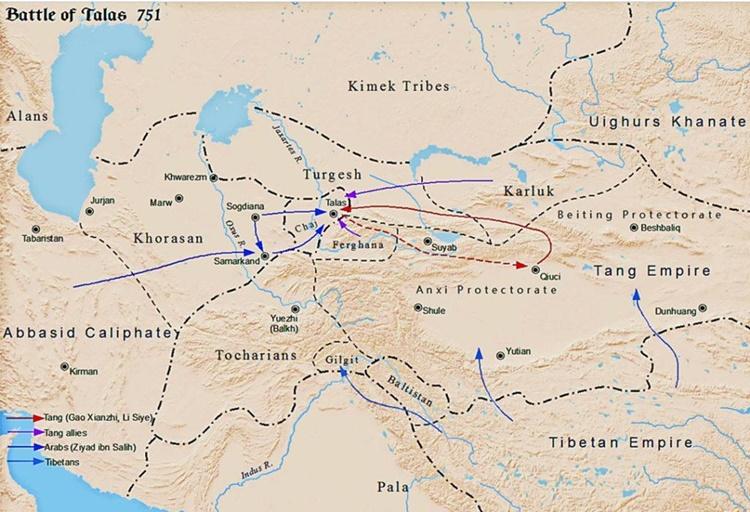 The Battle of Talas – Between the Abbasids and the Chinese

The Battle of Talas determined which of the two civilizations, the Chinese or the Muslim, would predominate in Central Asia. It led to the spread of Islam in the region and introduction of Chinese paper-making technology in the Islamic world.

This battle has been covered in both Chinese and Arabic sources. The renowned Muslim historian Ibn al-Athir (1160-1233) and the scholar of hadeeth Imam al-Dhahabi (1274-1348) have covered this battle in their writings.

Curiously, the most outstanding early Muslim historian, al-Tabari (839-923), has nothing to say about the Battle of Talas – indicating perhaps that from the medieval Islamic perspective, the battle seemed a rather unimportant encounter.

What led to the battle was perhaps a petty fight between two local kingdoms: Fergana and Chach. Fergana sought Chinese help and they besieged Chach. Using treachery after promising a safe exit, they executed the ruler, whose son escaped to the Abbasids in Khorasan.

Abu Muslim, the governor of Khorasan, quickly mustered an army along with neighborhood reinforcements and joined the army of Transoxiana under the brilliant commander Ziyad ibn Salih. Ziyad was a former governor of Kufa, Iraq under the Umayyads.

According to Muslim sources, the Chinese had arrived with an army of 100,000 (30,000 according to Chinese sources) near the Talas river. Chinese annals say the fighting lasted for five days, while Arabic records are inconclusive. The result of this epic encounter, however, is unanimously attested: The Muslims utterly destroyed the Chinese army. In the words of Imam al-Dhahabi, “Allah cast terror into the hearts of the Chinese. Victory descended, and the disbelievers were put to flight.”

Imam al-Dhahabi credits the victory to the strategic acumen of Ziyad ibn Salih, while the Chinese blame the Karluk Turks for revolting and changing sides during the battle. However, researchers point out that the Karluks were allied with the Arabs from the start and their positioning to attack the Chinese from the back was part of a strategic battle plan.

Regardless, the victory permanently ended Chinese influence in the region. The Abbasids ruled for the next 400 years and Central Asia has since been predominantly Muslim.

The Tang empire was going through internal rebellion and conflicts in China, which made them retreat and not come back to vie control in Central Asia.