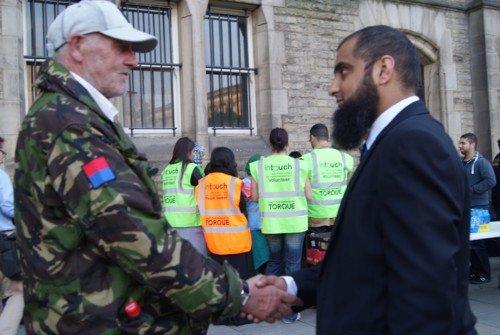 A man in Bradford, UK has said thanks after volunteers from a local Muslim charity gave him free food at their mobile soup kitchen.

The kitchen was set up in Bradford city centre by the InTouch Foundation to help provide hot food and drinks to those in need.

A service-user, who said he was visiting the soup kitchen for nearly a month, said: “If it weren’t for these people coming out and helping us, we’d be all committing crime and all be locked up…

“These lot have got full-time jobs at the end of the day, and they’re coming out and helping us.”

He later offered to help volunteer once he gets his own place to help put people “on the right path to life”.

“When the gentleman thanked us and said that it would stop him shoplifting the penny dropped for me it was not just about providing a meal it was about the other impact it has. The hidden impact.”

Osman added: “I’m proud of the team and all the volunteers without whom it would not have been possible.

“If other cities pooled their resources like InTouch Foundation has managed to do I firmly believe this would help reduce crime in the area. It’s only a meal but it has a far reaching impact.”