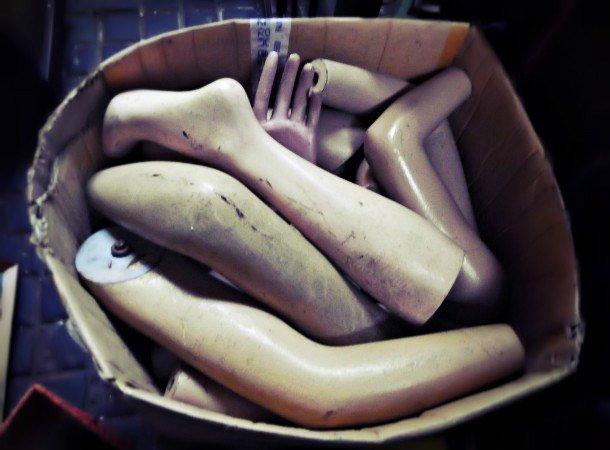 DOUMA — Thousands of Syrians have lost limbs during the country’s three-year war. Here in the Damascus suburbs, two men have opened a workshop where functioning prosthetics are fashioned out of found materials.

When Omar al-Ahmad celebrated his 13th birthday this year, he didn’t mark the milestone by shopping for new clothes with his father in downtown Damascus, coveting — as he would have done before the war — the uniform of his favorite soccer team on a mannequin in a shop window.

Instead, his gift was the right arm of a mannequin, fished out of rubble by his father and his father’s friends.

Omar and his younger brother both lost their arms six months ago, when their street, in the opposition stronghold of Douma, was shelled by government forces.

“We were forced — because of the siege laid on the city for over a year and a half – to come up with ways to provide for ourselves from the things we find around us,” says the boys’ father, Ibrahim. “A few months ago, I heard that Hajj Abou Salah opened a small workshop to make prosthetics for the residents who have lost their arms or legs, either due to shelling or due to the lack of medication that made amputation inevitable.”

Ibrahim went to Salah to ask him to make an arm for his elder son. But Salah was out of material, and suggested carving a wooden arm, or fashioning one out of metal.

“Either would be difficult to use because of its weight, and would have tired Omar,” Ibrahim says. “That’s how the search for a store window mannequin began, given that it would fit Omar’s height. Someone told us that we might find one in the rubble of destroyed stores.” They managed to find an undamaged arm, and Salah turned it into a prosthesis for Omar’s birthday.

Salah, 57, decided to start a pro bono limb workshop nearly a year ago, as government shelling of the Damascus suburbs increases.

“I was visiting one of my injured friends,” he says. “The doctor had recommended he walk every day to heal better, but he didn’t have any crutches. Some of his neighbors and friends would take turns helping him walk, but he always felt ashamed asking for help. I thought of making him crutches, but there was no material available. So I put together a crutch made of durable plastic pipes.”

Word spread among Ghouta’s residents, who, like more than 200,000 other Syrians in besieged areas, have been largely cut off from professional medical assistance. Salah gathered associates, “working with whatever was available, and at our personal expense.”

He joined forces with Abou Rushdi, a blacksmith before the war, and opened a workshop. “We started making crutches, then wheelchairs. We tried making prosthetic limbs but we couldn’t figure out how to mold the joints.”

In December, a man killed by shelling had a prosthetic foot. They were allowed to take the foot, disassembling the piece in order to study how the joint was fitted. “To our surprise,” Salah says, “our own methods were very close to the ready-made, high-end prosthetics. And we were able to improve.”

The 49-year-old Rushdi says the duo used mannequin pieces to make their early prosthetics, but were soon overwhelmed by demand. They switched to plaster, which also ran out, then to wood and metal, which proved too heavy for proper mobility.

So far, Salah and Rushdi have fitted 54 patients for limbs. “An industrial prosthetic used to cost anywhere between $250 and $600, depending on its quality,” Rushdi says.

“Today, it costs us about $200 to make one of these prosthetics. We use local material and do not receive any payment — all of the prosthetics we make are offered for free while Salah and I cover the expenses.”

The duo hopes to keep working until money runs out, but fellow locals are rising to the task. They’ve begun donating what they can to the workshop, he says, such as raw materials like plaster, mannequins and even water tanks.

With materials at a premium, they’ve been forced to be creative. The two are now using the firm, sturdy plastic from unused water tanks to construct prosthetic arms and legs. “I don’t know what will happen when we run out of those,” Rushdi admits, “but I’m sure we will find another way.” — Worldcrunch