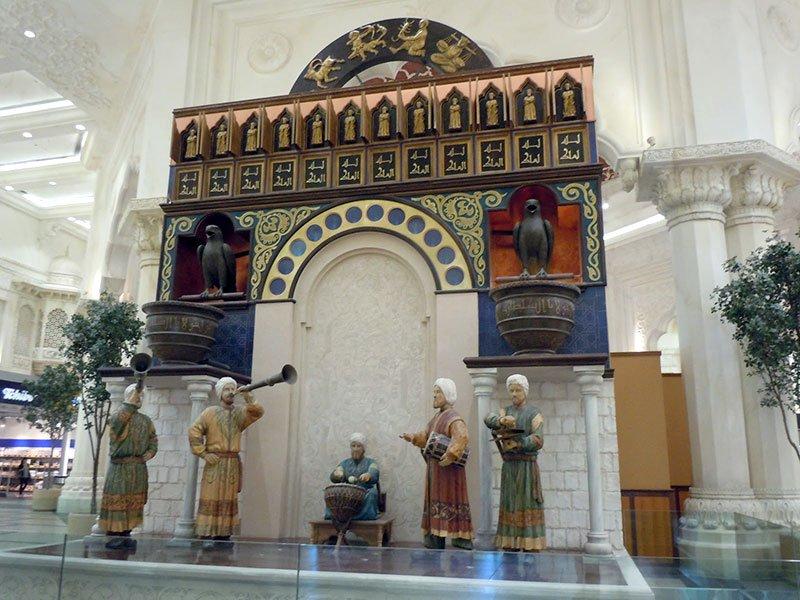 WATER CLOCKS, among the earliest timekeepers created by mankind, were initially used as important aids to astronomy.

One of the earliest forms of water-clocks, Clepsydra, is a simple Egyptian Vase (1500 BCE) from which water flowed out of small spout near its base. Divisions imprinted on its side indicated the time as the level dropped.

Later, Greek scholars added complexity by regulating flow and providing fancier displays of the passage of time. Archimedes (287-212 BCE) was the first to devise a water clock’s mechanical working in a treatise which was translated into Arabic by the Banu Musa Brothers in 9th century Baghdad.

Three hundred years later this knowledge was inherited by Al-Jazari, to which he added his own, original inventiveness and engineering prowess. Ornate with gold relief’s, heavenly dials, animated musical figures and bronze birds, the Castle Clock was both a visual and a technological marvel. He introduced a greatly advanced technology to accurately regulate the flow of water. It was perhaps the grandest design of all Al Jazari’s time-pieces.

Whilst never reaching the level of accuracy based on today’s standards of timekeeping, the water clock was the most accurate and commonly used timekeeping device for millennia, until it was replaced by the more accurate pendulum clock in the 17th century.

How the Castle Clock Works

Within the Castle Clock, Al Jazari made use of sophisticated mechanics to harness water and to be able to tell time.

The main technological achievement of the Castle Clock is an ingenious flow regulator that governs the amount of water that runs between the main reservoir and a trough. By means of a weighed float which descends with the level of water, pulley connected to all the clock’s dials is tugged. In turn they trigger mechanisms that provide further motion to other components. One of these components is a small wooden cart behind the clock’s façade and as it moves a wooden track, it prompts a dramatic chain of events.

Upon each hour the cart triggers two doors which open to reveal a figurine and the words “Dominion is God’s”. Further, it releases two balls into the beaks of bronze falcons which in turn drop the calls into the copper vases, announcing the time with a crash of cymbals. At the same time, water which has escaped from the reservoir is directed into troughs to set in motions the animated musicians who play on every third hour.

As water flows over a scoop wheel, cam shafts then activate the musicians who lively beat a cymbal and drums while the trumpets sound by means of air expelled through whistle jars. Meanwhile, the cart continues its hourly journey, setting forth further the magical elements of the Castle Clock.

Ref: Transcribed from the displays at Ibn Battuta Mall in Dubai.