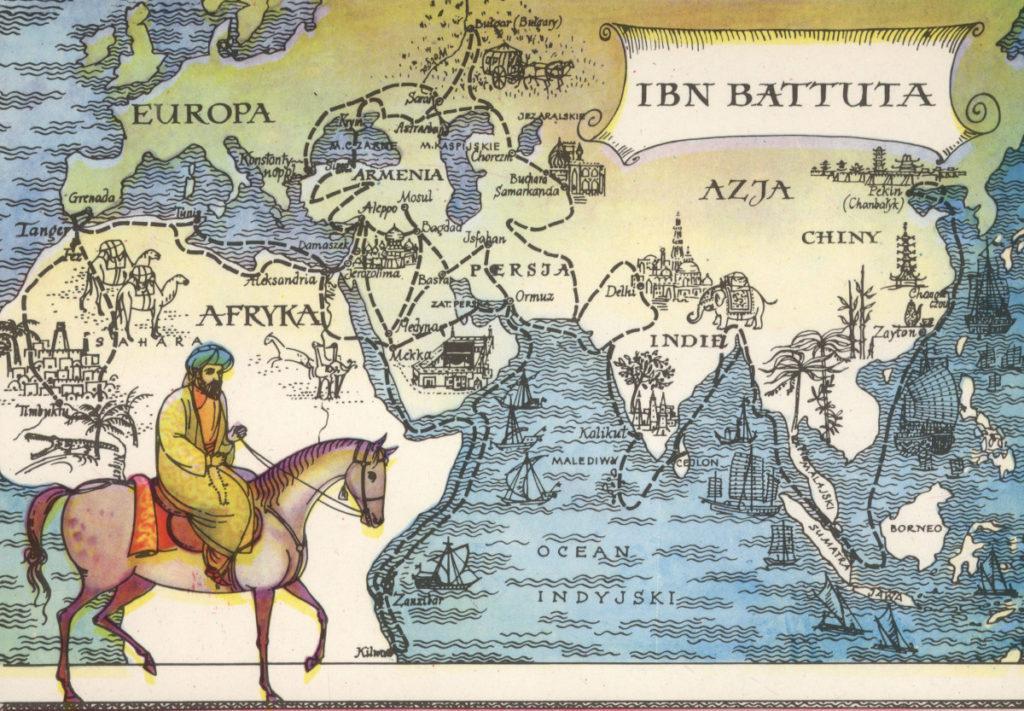 Ibn Battuta (1304-1369) was a noted explorer and traveler born in Morocco into a family of judges. He studied Islamic theology, but little did his family know when he left at the age of 21 to perform Hajj at Makkah that he would not return to his native town for nearly three decades.

He served as a Qadi (judge) for eight years in the Sultanate of India under Sultan Muhammad Tughlaq (1326-51). The Sultan assigned him a mission to China in 1341 as an ambassador to meet the most powerful ruler in the world, the Mongol Emperor of China.

The life-threatening adventure began just as he left Delhi where he was taken prisoner by Hindu rebels and was hunted for eight days as a fugitive before ending up at the shores of Calicut with nothing but the clothes he wore and a prayer mat. He was blessed to be alive.

He continued his journey to China via the Maldives where he became a chief judge – without the intention of becoming one – and married into the royal family. He then set sail from Sri Lanka when his ship nearly sank in a storm. He was rescued by another ship which was attacked by pirates who stole all his provisions and the precious stones given to him by the King of Ceylon. He again ended up in Calicut with no clothing except his trousers.

He set sail once more, briefly stopping at the Maldives to see his two year old son for the first time, then boarded a ship to China via Chittagong (the main port of Bangladesh) and the Muslim Kingdom of Samudra (Sumatra, Indonesia). He finally arrived at the port of Madinat al-Zaitun (Quanzhou) in 1345.

He described al-Zaitun as housing one of the largest ports in the world with about a hundred junks (Chinese sailing ships) that could not be counted for multitude. Every city had a separate Muslim quarter where merchants and their families lived in an honoured and respected manner with their own mosques, hospitals and bazaars.

The Qadi “Fanzhang” (judge) of the Muslims, who was Sheikh al-Islam and the leader of the merchants, all came to meet Ibn Battuta with flags, drums, trumpets and musicians. He was invited and entertained by some immensely wealthy Muslim merchants. He was well received in every city as guest of honour on his way to Beijing, only to be disappointed to find the Emperor absent from the capital. He returned to al-Zaitun before sailing back to his native land in 1349.

Ibn Battuta had arrived in the last peaceful years before the collapse of the Mongol (Yuan dynasty) rule. He noted, “China is the safest and most agreeable country in the world for the traveler. You can travel all alone across the land for nine months without fear, even if you are carrying much wealth.”

He declared that of all people the Chinese were the most skillful in the arts and possessed greatest mastery of them.

He admired much that he saw. He observed that “silk is used for clothing even by poor monks and beggars” and that the porcelain was “the finest of all makes of pottery.” Even the poultry amazed him: “The hens … in China are … bigger than geese in our country.”

But China was not a Muslim land

Muslims were a minority in China. Unlike Ibn Battuta’s previous destinations, China was not a Muslim country, and he was taken aback by what he saw.

“China was beautiful, but it did not please me. On the contrary, I was greatly troubled thinking about the way paganism dominated this country. Whenever I went out of my lodging, I saw many blameworthy things. That disturbed me so much that I stayed indoors most of the time and only went out when necessary. During my stay in China, whenever I saw any Muslims I always felt as though I were meeting my own family and close kinsmen.”

“The Chinese themselves are infidels who worship idols and burn their dead like the Hindus … eat the flesh of swine and dogs, and sell it in their markets.”