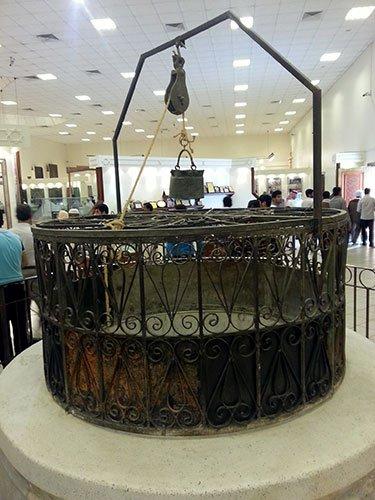 Why Zamzam water is miraculous and special

Old Zamzam Well at the Museum in Makkah. — Photo by Islamopedia

EVERY Muslim is aware of the miracle of Zamzam and how it came into being. Prophet Ibrahim عليه السلام surely did not know the wisdom behind leaving his wife and his only son in a deserted valley without plants or water. Nor did Hajar, may Allah have mercy on her, know that Allah had a special reward in store for her because of the profound faith and patience she showed.

Hajar had only minimal supplies. She had a bag of some dates and a waterskin containing a little water. They soon ran out, after which she and her son Isma’eel عليه السلام became thirsty. Unable to see her little son Isma’eel in agony, she climbed the mountains Safa and Marwa, running to and fro leading up to seven times, desperate in search of some help.

One of the best angels, Jibreel عليه السلام was sent to relieve her from her distress. He started to dig the ground with his heel (or wing) from where water gushed forth – the blessed water of Zamzam. Let’s try to know more about this blessed water that we have been gifted by Allah.

Where does Zamzam water come from

According to Arab historians, the well of Zamzam — except for a few periods when it became dry or was buried under the sand — has been in use for around 4000 years, Subhan Allah!

The important question is: where does it come from?

Makkah is built on a mass of igneous rock, and due to the process by which they form, these rocks have no pores. Partial melting of the minerals which comprise the rock cause any existing pores to close up. Science tells us that water reservoirs can only exist in rocks that are highly porous and permeable.

Geologist Dr Zaghloul Al-Najjar, head of The Committee of Scientific Signs in the Quran and Sunnah, states that this simple and great fact verifies the sanctity and holiness of the land. He said: “Allah in His infinite wisdom prepared for this water a special kind of surroundings that no other water has. It flows through long stretches of rock from which it gains its high mineral content — minerals that Allah knows are good for the body and soul of a man.”

The well of Zamzam is hand-dug and is about 30.5m deep, with an internal diameter ranging from 1.08 to 2.66m. The well lies within Wadi Ibrahim, which runs through Makkah and taps groundwater from the Wadi Alluvium and to a much lesser extent, the underlying fresh bedrock. The well is now housed in a basement room protected by glass panels that allow a clear view of the well.

Scientific proof of the hadeeth of Zamzam’s origin

The origin of the Zamzam water was a mystery until tunnels were dug around Makkah, where engineers and workers found hairline fractures in the solid mass of rock that stretched for kilometers in either direction through which Zamzam was seeping out. They revealed extensive fractures which could only be caused by a mighty impact. The Sunnah states that it is because of the strong blow with which Jibreel عليه السلام struck the earth that Isma’eel عليه السلام was able to drink.

Is Zamzam pure and healthy to drink?

Water that is stored in the form of snow or ice on the mountains is known as the purest form of water. This water is marketed by brands such as Evian and is advertised as  water from the highest part of the French Alps. It has a high mineral content and purity, and a high percentage of bicarbonates (357mg/l).

Zamzam, on the other hand, contains 366 mg/l of bicarbonates, and is in fact the purest water on earth. A German scientist, Dr Knut Pfeiffer, head of the largest medical centre in Munich said: “Zamzam water is chemically pure.”

“Zamzam water is the best and noblest of all waters, the highest in status, the dearest to people, the most precious and valuable to them. It was dug by Jibreel and is the water with which Allaah quenched the thirst of Isma’eel.”

Japanese scientist Dr Masaru Emoto who has a special interest in crystallization of water, discovered that water coming from different lakes, ponds, etc. produced different crystals altogether. He continued this research on Zamzam water as well but astonishingly he couldn’t crystallize Zamzam.

He said that when he diluted the water by 1,000 and froze it, he got a uniquely-shaped crystal. Two crystals were formed, one on top of the other, but they assumed a unique form, Subhan Allah! Every molecule of Zamzam is a miracle!

Growth of algae or any sort of biological growth or vegetation is likely to be seen after some years on a well. This renders the water in the well unpalatable to drink, as growth of algae leads to a change in taste and odour.

However, Zamzam is different from any other water, as no bacteria can form at its source. It doesn’t go mouldy nor does it change colour, taste or smell.

Researchers have analyzed Zamzam water and examined the extent of its purity and found that it has a wonderful composition that makes it different from other drinkable liquids because it is naturally pure and sterile and has no germs in it.

He conducted this research on 60 people, and took pictures of them before and after drinking Zamzam, and found that there was a great response on the energy fields in humans.

He said: “Zamzam water has something in it that is different to other waters, and what is in it is healing and helping your energetic systems, and your cell systems.”

Muslims have always known about the healing nature of Zamzam. Now even science proves that Zamzam contains healing components.The water contains fluorides that have an effective germicidal action.

Dr Knut Pfeiffer says: “Zamzam water is a liquid energetic medicine. In my opinion, it’s not just water, but a medicine.”

The Prophet ﷺ said: “The best water on the face of the earth is the water of Zamzam; it is a kind of food and a healing from sickness.” [Saheeh al-Jaami’, 3302]

“Myself and others tried seeking healing with Zamzam water and saw wondrous things. I sought healing with it from a number of illnesses, and I was healed by the permission of Allah. I saw someone who nourished himself with it for a number of days, half a month or more, and he did not feel hunger; he performed Tawaaf along with the other people just as they did. And he told me that he consumed nothing but Zamzam water for forty days and he had the strength to have intercourse with his wife, to fast and to perform Tawaaf numerous times.”

Zamzam is rich in minerals

Zamzam water has been proven to contain high levels of fluoride, Mg, Ca, Chloride, sulfate, nitrate and alkalinity when compared it with tap drinking water. The difference between Zamzam water and other (city water) is in the quantity of calcium and magnesium salts. The content of these was slightly higher in Zamzam water. This is why Zamzam water refreshes tired pilgrims.

Zamzam can be substitute for food

Have you ever thought of living only on water? Do you think you could survive? Studies have proven that it is possible as long as water is used as a substitute for the food. This is called water fasting, and Zamzam can be used for it.

It was reported in Saheeh Muslim that the Prophet ﷺ said to Abu Dharr رضي الله عنه‎‎ who had stayed near the Ka’bah and its coverings for forty days and nights with no food or drink other than (Zamzam): “How long have you been here?” Abu Dharr t said: “I have been here for thirty days and nights.” The Prophet ﷺ said, “Who has been feeding you?” He said, “I have had nothing but Zamzam water, and I have gotten so fat that I have folds of fat on my stomach. I do not feel any of the tiredness or weakness of hunger and I have not become thin.” The Prophet ﷺ said: “Verily, it is blessed; it is food that nourishes.” (Sahih Muslim, 2473).

Zamzam is whatever intended for

The Messenger of Allah ﷺ said: “The water of Zamzam is for whatever it is drunk for.” (Ibn Maajah, 3062)

Scholars and righteous people have experienced this – they have drunk Zamzam with the intention of fulfilling some need such as healing from sickness or being freed from poverty and distress, and Allah fulfilled these hopes.

“You should have the intention of what you want to gain by drinking this water. He should drink his fill, i.e., fill his stomach with it until it is filled to the ribs, because this water is good. A hadeeth has been narrated concerning this: the difference between the believers and the hypocrites is drinking one’s fill of Zamzam water.” (Narrated by Ibn Maajah in al-Manaasik, 1017; al-Haakim, 1/472).

Al-Boosairi said: “This is because Zamzam water is not sweet; it is somewhat salty, and the believer only drinks this somewhat salty water out of faith, believing that there is barakah (blessing) in it. So when he drinks his fill of it, this is a sign of faith.” (Sharh al-Mumti’, 7/377, 378, 379).

Weight loss: It reduces the impacts of hunger.

Weight gain: Regular intake of this amazing liquid helps to nourish the body and may also increase your body weight.

Increases eye beauty: Applying this water over your eyes helps to brighten the eyesight. Washing your eyes with this water is also helpful to cure many eye-related disorders.

Alhamdulillah, Muslims are surely blessed by Allah, who caused Zamzam water to spring forth for us. Let me end with a story, which will give us true insight of Zamzam.

A woman called Layla al-Hilw from Morocco suffered from cancer. The doctors she consulted in Belgium failed to provide her with a cure for this deadly disease and told her husband to take her home to die. She and her husband decided to visit the Sacred House in Makkah where she drank her fill of Zamzam water -knowing it serves the purpose for which it is drunk-, wept a great deal, read the Qur’an and prayed to Almighty Allah to cure her.

Her friends advised her to wash the upper part of her body which was filled with nasty swellings as a result of the breast cancer she was suffering from. One day, to her astonishment and great excitement, she found that Allah had cured her, Subhan Allah!