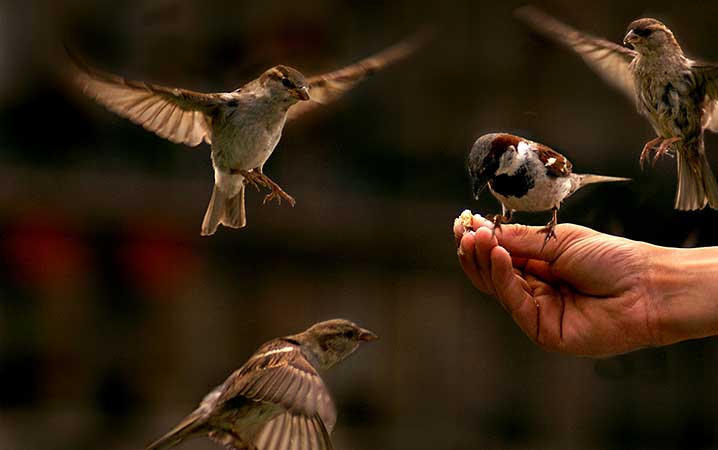 In Whose Hands Is The Rizq?

“WHILE I was heading outside the masjid in Basra, a very gruffly and rude looking Bedouin approached me,” said Al-Asma’i (d. 213H), one of the early scholars noted for his vast knowledge and piety and who tutored the sons of Caliph Haroon Rasheed.

“Which tribe do you belong to?” asked the Bedouin man.

“Are you the one they call Asma’i? The famous scholar Asma’i?” the Bedouin asked.

The curious Bedouin jumped forward and said, “Tell me more about where you come from.”

Al-Asma’i wanted to take the opportunity to give dawah to this Bedouin. He said, “I’m from a place where they recite the word of Allah.”

The Bedouin exclaimed, “There is a word of Allah recited among the tongues of the humans!?” Asma’i nodded and the Bedouin nagged him to recite the word of Allah.

Asma’i recited Surah Adh-Dhariyat (Zariyaat) and when he reached the verse (22), “And in the heaven is your provision and whatever you are promised”, the Bedouin shouted, “Enough!”

“Is this is the word of Allah?” he asked.

Asma’i said, “Yes, indeed this is the word of Allah revealed to the Prophet Muhammad ﷺ.”

The Bedouin hurried to his camel, slaughtered it and turned to Al-Asma’i and said, “Come on Asma’i, help me give away this camel in charity to the poor!”

He then broke his sword and bow and faded away in the desert reciting the verse, “And in the heaven is your provision and whatever you are promised.”

A few years later later, Asma’i narrates, “I went to perform Hajj with Haroon Rasheed and I heard a voice calling out my name. I turned and it was that Bedouin. He looked pale and old. He asked me to sit down and recite the words of Allah to him. I started to recite Surah Adh-Dhariyat and when I stopped at the verse I had stopped at earlier, “And in the heaven is your provision and whatever you are promised,” the Bedouin said, “I found the word of Allah to be true! Recite more Asma’i.”

I began to recite the next verse, “Then by the Lord of the heaven and earth, indeed, it is truth – just as [sure as] it is that you are speaking.”

The Bedouin said in astonishment, “Who then has angered Allah that He, the Almighty, the Sublime, the Supreme had to take an oath!?”

The Bedouin began to recite the verse and when he reached the third time, the verse melted him to death. The narration has been reported by Ibn Qudaamah and Ibn Qurtubi with many chains.1 The chapter of Rizq is a very well-examined subject in the Quran and Sunnah. Firstly, to strengthen one’s faith and Tawheed (believing in the oneness of Allah) in Allah. Secondly, to put one’s heart at ease. When we hear the word Rizq, the image of daily provision and wealth comes to mind, which is Rizq and there is no doubt about that. But it is not limited to just wealth and daily provision.

There are two types of Rizq: one is the materialistic Rizq and the other encompasses many other things: The food we eat is Rizq, our spouses are Rizq, our children are Rizq, happiness is Rizq, Eemaan is Rizq, health is Rizq, knowledge is Rizq, sleep is Rizq, Islam is Rizq, peace of mind is Rizq, and so on.

All beautiful names belong to Allah, Azza wa Jal. Among the magnificent names of Allah is Ar-Razzaq and Ar-Raziq.

Ar-Razzaq means the One who organizes and continuously provides for the creation from time to time during their lifespan. It is important to understand these names of Allah comprehensively to complete our belief. Weak belief in this matter can cause defects in faith (Eeman) and a stressful life.

A Promise From The Heavens

Just as the verse changed the life of the Bedouin, it should also change our perspectives, In sha Allah.

The poor Bedouin slaughtered the camel as he had become free from worry and stress. But what exactly was in the next verse that melted him to death a few years later?

The verse is a very powerful oath. When Allah says “…by the Lord of the heaven and earth..,” He, Azza wa Jal, is taking an oath on Himself about the fact that Rizq is from the heavens and that this matter is as true and real as your speaking.

Let’s dwell more into that: “… indeed, it is the truth – just as [sure as] it is that you are speaking.”

Do you have any doubt that you speak? Just as sure you are that it is you who is speaking, be sure about the fact that your Rizq is from Allah Azza wa Jal and no one else.

Can someone use your mouth, your vocals, your voice, your tongue and your throat to speak the way you do? No! In the same way, your Rizq is yours and no one else can take it from you. So, loosen up!

To add more emphasis to the oath, Allah added the letter ‘Laam’ before the word ‘Haqq’ (truth). In Arabic, if the letter ‘Laam’ appears before a word, it refers to certainty, assurance and assertiveness. So, it is for surety that Rizq is from the skies.

There are many other verses and ahadith which deliberate Rizq in this way. This is to establish faith in a topic that men are weak in. It is a matter which distresses people and occupies most of their thoughts. Allah Azza wa Jal wants us to live a faith-filled life which entails a stress-free living.

He, The Most Wise, Did Not Forget You

“And there is no creature on earth but that upon Allah is its provision, and He knows its place of dwelling and place of storage. All is in a clear register.”  [Quran, Hood 11:6]

The word creature in the above verse includes all moving creatures; animals, humans, birds etc.

Allah says in another verse:

“And We have certainly honored the children of Adam and carried them on the land and sea and provided for them of the good things and preferred them over much of what We have created, with [definite] preference.”  [Quran, Al-Isra 17:70]

When Allah Azza wa Jal promised Rizq for animals and all other creatures, how can He, Jalla wa Jalaal, forget the ones He honored and preferred over all other creatures? One may argue, why hasn’t Allah Azza wa Jal made me rich? Why do I have less, when others have more? Know that Allah is also Al-Hakeem, The Most Wise. He knows best of what is good for us, more than what we know for ourselves. We know of some Prophets who were given more wealth than the others, but none of them objected Al-Hakeem. Our minds will be at rest only if we submit our affairs to the One who created us.

“And if Allah had extended [excessively] provision for His servants, they would have committed tyranny throughout the earth. But He sends [it] down in an amount which He wills. Indeed He is, of His servants, Acquainted and Seeing.”  [Quran, Ash-Shura 26:27]

“Concern yourself with that which you were ordered to take care of, and do not be concerned with something that was not guaranteed for you. Sustenance and the matter of death are two matters whereof there is no doubt. As long as one is living sustenance is guaranteed. And if Allah, according to His wisdom, closed the way to some means, He will, according to His mercy, open another means for you, which will be more useful.” [2]

“It is He who made the earth tame for you – so walk among its slopes and eat of His provision – and to Him is the resurrection.”  [Quran, Al-Mulk 67:10]

However, when referring to the Hereafter, He used the words “run,” “race” and “strive” because the rewards of the hereafter and jannah and its different levels and ranks are not guaranteed for everyone. So, run, race and strive for the eternal.

“Race toward forgiveness from your Lord and a Garden whose width is like the width of the heavens and earth, prepared for those who believed in Allah and His messengers.”  [Quran, Hadid 57:21]

The Element Of Tawakkul (Reliance)

Umar said, “I heard the Messenger of Allah ﷺ say, ‘If you were to rely on Allah as He should be relied on, He would provide for you as He provides for the birds. They go out early in the morning hungry and return in the evening full.” [Al-Tirmidhi, 2344] The Prophet ﷺ gave a splendid example of the birds going out early, having reliance on Allah Azza wa Jal and then return in the evening full. He ﷺ did not mention that the birds relied upon Allah and stayed cozy in their nests. The element of Tawakkul (reliance) here is to have firm belief in Allah and use the means available.

Sahl Ibn Abdullah Ad-Dasturi said something golden about this issue:

[Also read: In Allah We Trust: What Tawakkul Really Means]

In Whose Hands Is Rizq?

The fear of poverty is a worldwide disease. If we observe the materialistic world around us, everyone is running, tiring, and stressing over something which is guaranteed for them. Whatever is written shall come to pass by Allah’s command, regardless of whether one runs or walks. It’s saddening how we strive for the dunya, which will perish one day and neglect the hereafter which will remain forever. This is indeed shaitaan tricking the son of Adam and making him busy with the dunya, which will make him belittle the matters of the hereafter.

If one believes that Allah Azza wa Jal is his Lord, Prophet Muhammad ﷺ is the final messenger, Islam is the only true religion, death is truth, and resurrection is truth, then he should also believe with certainty that his Rizq is from Allah alone. An iota of doubt in this matter will lead to a serious defect in faith (Eemaan). Eemaan in the matter of Rizq is a mercy from the heavens, which helps one live a life of contentment and righteousness.

There were generations of people who lived before us. They walked on the earth like you and me do. In fact, there are many in the graves who spent just a few years on earth and are spending years and years in the grave.

Rizq is in the hands of Allah Azza wa Jal and only He controls it. But He Azza wa Jal left you and me with a choice: worry about what is guaranteed in a temporary life or work for the eternal life?