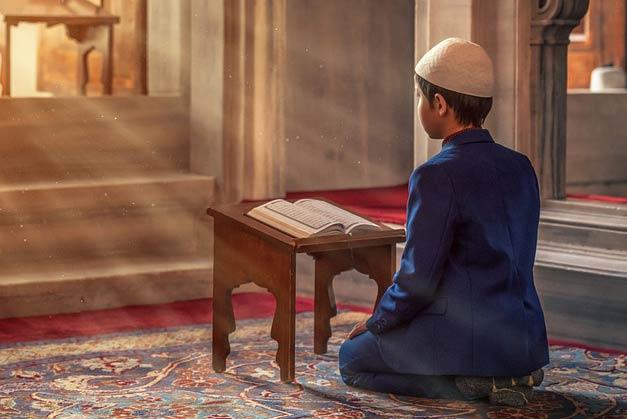 One misconception many Muslim youth hold is they view Islam as a rigid/extreme religion and as a religion that is tough to practice. Because of that, many youth shrink away from Islam or abandon it altogether in their teen years or early adulthood.

However, one thing we must remember is that Islam is not a religion of extremity. In fact, when Islam is practiced in the way that it is intended to be practiced, it is not a difficult religion to immerse yourself in because Islam actually adheres to basic human psychology and human nature. This concept of making religion easy is shown in the following saying of Prophet Muhammad ﷺ, which is called a hadith in Arabic:

Narrated by Abu Hurairah: Prophet Muhammad ﷺ said, “Religion is very easy and whoever overburdens himself in his religion will not be able to continue in that way. So you should not be extremists, but try to be near to perfection and receive the good tidings that you will be rewarded; and gain strength by offering the Salat (prayers) in the mornings, afternoons and during the last hours of the night.” (Al-Bukhari)

There is quite a bit to unpack from the hadith, and there are four main learnings which we’ll discuss below. However, the obvious lessons are that we should not make our religion difficult by overburdening ourselves, going to extremes, or expecting perfection. Instead, Prophet Muhammad ﷺ advises that we simply need to do our best, keep our hopes in Allah, and utilize prayer as a means of gaining strength.

One thing to remember is that making our religion easy does NOT mean that we become lazy in our practicing of Islam or that we use this hadith as an excuse not to improve ourselves. What making our religion easy means is that we do not become too lax or too extreme in how we worship Allah, fulfill our social obligations, or try to grow as people and Muslims. Instead, we should try to find a middle ground in how we live our lives and in how we practice our religion.

Now, let’s break down the four main learnings from the hadith:

1. Religion Should Be Easy

Islam is not meant to be a burden on our lives. It is meant to be something that we integrate into our lives, not something that we compartmentalize. Following Islam should make us happier and more fulfilled. If a person is neglecting their family, health, or well-being in the name of Islam, then that is not true Islam.

An example of this is the famous story of when some women of Madinah came to Prophet Muhammad ﷺ complaining that their husbands were spending their whole night in prayer and were neglecting them. The Prophet ﷺ responded by chastising the husbands of these women and telling them that their wives had a right over them.

Think of this analogy. Imagine a horse rider who rides their horse so far without giving it any rest. Of course, the horse will perish at some point. In the same sense, if we don’t make religion easy on ourselves, we will lose the joy of Islam and our faith will perish like the horse whose master rides it too hard without giving it any rest. We need to find a middle ground in how we practice religion, one that will help us grow as people without consistently over-exerting ourselves.

Some Muslims stretch themselves too thin and overburden themselves in the name of Islam. Because of this, sometimes their personal lives suffer as a result. However, we should remember this famous hadith:

Prophet Muhammad ﷺ was asked, “What deeds are loved most by Allah?” He said, “The most regular constant deeds even though they may be few.” He added, “Don’t take upon yourselves, except the deeds which are within your ability.” (Al-Bukhari)

The deeds Allah loves best are the good deeds that are done on regular basis, whether big or small. Even the small deeds we consistently do will In-sha-Allah be a mountain for us on the Day of Judgment. Therefore, we should focus on creating the habit of doing daily good deeds that can be integrated into our normal routine. Remember, we never know which good deed will be the one that allows us to enter Jannah, and even a small deed can reap an immense reward when done with pure intentions.

2. Allah Does Not Expect Perfection

Another factor that causes stress on Muslims is the idea that they are not doing enough to please Allah. Muslims are often taught to “fear Allah” and taught to be afraid of His wrath. However, this concept of having to be perfect and the fear of making mistakes is not true Islam.

Nowhere in the Qur’an and in no authentic hadith is it ever even hinted that Allah expects perfection. Instead, Allah and Prophet Muhammad ﷺ have told us time and time again that Allah actually expects us to make mistakes and falter. One hadith states this plainly:

Prophet Muhammad ﷺ said, “All children of Adam are sinners, and the best of those who sin are those who repent.” (Tirmidhi)

Repentance is synonymous with self-improvement because repentance involves trying to undo the sin/mistake if possible, asking for forgiveness, making the intention to not repeat the mistake, and then compensating the mistake with a good deed. Therefore, repentance is a way that we build our character and progress as individuals. It is something shown in our actions, not just in our words.

Making our religion easy also means that we keep high hopes in Allah’s mercy. One hadith that explains this idea is:

Abu Hurayrah reported that the Prophet Muhammad ﷺ said: “Allah says, ‘I am as My servant expects Me to be.’” (Al-Bukhari)

The above quotation is the first sentence in a long hadith; however, just this sentence holds an ocean of knowledge. It shows us that we get from Allah what we expect. If I expect harshness from Allah, then that is what I’ll get. However, if I expect good things from Allah, if I have high hopes in His mercy, and if I have high hopes that he’ll accept my good deeds and multiply my reward, then that is what I will get. To put it plainly: our expectation affects what we receive from Allah.

We need to maintain humble yet positive expectations with Allah. Remember that the majority of Allah’s 99 names/attributes deal with His compassion, His love, and His mercy toward humanity while only a handful of His names/attributes describe His wrath. This shows that Allah’s mercy outweighs His anger. Allah is a benevolent Lord who wants the best for us, and our attitude toward Him should reflect this.

Abu Huraira reported: Prophet Muhammad ﷺ said, “Call upon Allah with certainty that He will answer you. Know that Allah will not answer the supplication of a heart that is negligent and distracted.” (Tirmidhi)

Again, we need to have the right expectation when we think of Allah. Whenever we do our best, do a good deed, repent, or supplicate to Allah, we should have the full conscious expectation that He will accept our good intention/deed or accept our supplication.

This does NOT mean that we become entitled or complacent. Instead, it means that wehave high hopes that Allah is always listening and will always do what is best for us.

The Qur’an states: “Oh you who believe! Seek help with patient perseverance and prayer, for Allah is with those who patiently persevere.” (Qur’an, 2:153)

There are several places in the Qur’an where prayer (Salah) and patience (Sabr) are mentioned side-by-side. This demonstrates that the two naturally go together. The purpose of our daily prayers is to keep us safe from evil acts, and one definition of Islamic patience is it’s the efforts and energy we put to staying on the right path and not falling into evil temptations. Since prayer is how we build restraint and patience is how we exercise restraint, the two go hand-in-hand.

With that being said, prayer helps strengthen our faith in Allah and therefore gives us strength. Patience is how we exercise that strength. By keeping us safe from evil deeds, prayer helps us build our patience because patience revolves around not falling into temptation.

In conclusion, the main learnings are to find a middle ground in how we practice Islam and to not be too extreme or too lax. Islam should be integrated into our daily lives, not something we compartamentalize. We should not be too hard on ourselves and not expect perfection from ourselves. However, we should maintain positive expectations in Allah and use prayer as a way to strengthen ourselves and increase our patience.