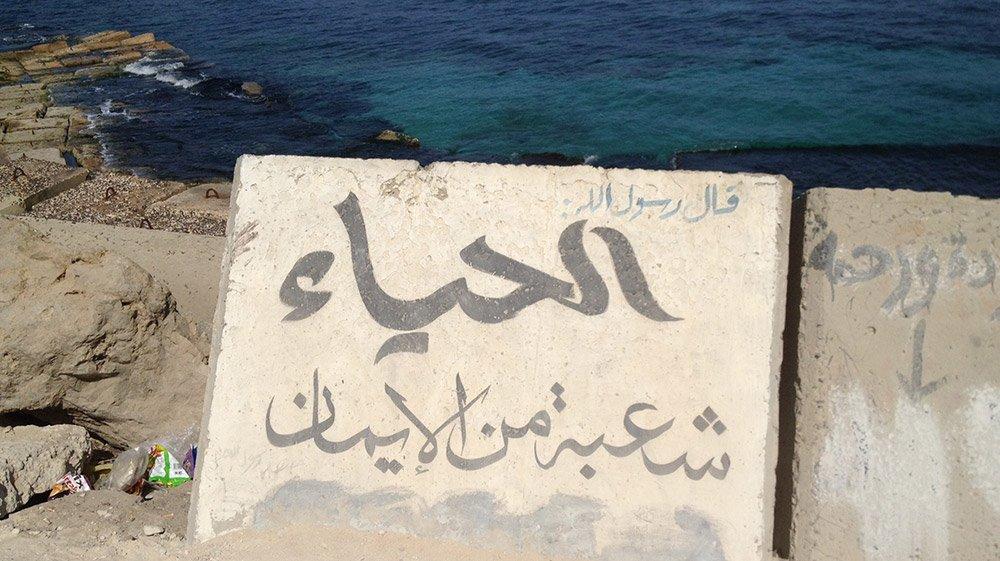 Haya in Islam: Cultivating Modesty in an Immoral World

The graffiti reads, “Allah’s Messenger ﷺ‎ said: Haya is a branch of faith.”

For a generation that has been brought up on risqué offerings from Hollywood and Bollywood, music channels, TV soaps and talk shows, suggestive advertisements and explicit content on the Internet, the Islamic concept of Haya’ might seem like an outdated, impossibly archaic ideal.

Increasingly, people see nothing wrong with bragging about illegitimate carnal adventures, using foul language, cracking jokes laden with double entendre, sharing graphic images and videos via Bluetooth and email, and generally participating in and contributing to creating a pervasive atmosphere of permissiveness.

While we may blame the media for driving Haya’ from our public and private lives, we must ask ourselves: What can we do to counter this assault and cultivate this all-important value, which is one of the branches of Imaan (Faith), and as evident from its root word, is the essence of life (Hayat) itself?

Understanding the many meanings of Haya’

Haya’ has been variously translated as modesty, diffidence, timidity, bashfulness, shame or inhibition. However, it is much more than that. It is an unquestionably positive quality that stems from a strong sense of self-respect and Taqwa (consciousness/acute awareness of Allah). It enables one to shy away from the very idea of doing a deed that is displeasing in the sight of Allah, who is Subtle, All-Aware, whether in public or private.

In his book ‘Madarij Al-Salikeen’ Ibn Al-Qayyim Al-Jawziyyah says, “If one does something in secret that he would shy away from doing in public, this means that he means nothing to himself.”

There are several instances from the life of the Prophet ﷺ‎ and the lives of the Salaf, which show their strong sense of Haya’: they rushed to cover parts of their body that became exposed inadvertently (it is said that some of them even bathed with a covering cloth), and remembered to retain their Haya’ in the most extenuating circumstance, as in the famous case of a woman Companion who on hearing of the death of her son stepped out of her house only after wearing her Hijab saying: “I may have lost my son, but I haven’t lost my Haya.”

Contrary to the popular misconception that Haya’ is confined to a preoccupation with women’s Hijab and behavior, the Islamic injunctions for modesty – physical and spiritual – are equally applicable to men. In fact, the Qur’an addresses believing men before women, with the injunction to: “…limit or reduce some of their vision and guard their private parts. That is purer for them.” (Qur’an, 24:30)

The Prophet ﷺ‎ was “more bashful than a veiled virgin girl” (Al-Bukhari and Muslim), and, according to a narration in Al-Bukhari, he “was neither a Faahish (a person who speaks obscene language to make people laugh), nor a Mutafahhish (a person who habitually uses bad language).”

Several men companions were well known for their sense of modesty – most notably Uthman Bin Affan, the Prophet’s son-in-law and the third Caliph of Islam. Ayesha reported that once the Prophet ﷺ‎ was sitting in a reclining posture in her chamber and received two of his companions, Abu Bakr and Umar, but sat up in a more formal way to receive Uthman, in recognition of his modesty.

The Companion Dihyah Al-Kalbi had such a pleasing appearance that he voluntarily wore a face-covering whenever he went out, in order to avoid being the cynosure of all eyes. Undoubtedly, the heightened sense of modesty among the companions was a reflection of their strong faith.

[Also read: A Conflict Of Cultures: Being Muslim In The 21st Century]

Haya’ of the heart

Haya’ includes a deep-rooted sense of humility that stops one from behaving boastfully, shamelessly promoting oneself at the expense of others, indulging in self-aggrandizement and ascribing goodness and purity to oneself.

The Prophet ﷺ‎ was conscious of preserving the modesty of others and never stared at people directly or reprimanded offenders by name in public. He discouraged his companions from exaggerating their respect for him out of a sense of humility, and never adopted the mannerisms or lifestyle of a spiritual or temporal ‘ruler of men’.

Islam has never imposed artificial squeamishness or hypocrisy in the name of modesty. The Prophet ﷺ‎ was forthright when it came to discussing matters of religion and was often approached by both men and women companions seeking clarifications on personal matters like cleansing after menstruation, conjugal relations and wet dreams.

However, Islam treats conjugal relations with respect and an injunction to not discuss intimate details of one’s married life in public.

Abdullah Bin Umar narrated that the Prophet ﷺ‎, once passed by a man who was admonishing his brother regarding Haya’ saying: “You are too shy, and I am afraid that might harm you.” On that, the Prophet ﷺ‎: “Leave him, for Haya’ is (a part) of Faith” and in another narration, he said: “Haya’ does not bring anything except good.” (Al-Bukhari)

The Prophet ﷺ‎ said, “Every Deen (way of life) has an innate character, a distinct call, and the call of Islam is Haya’.” (Abu Dawood) It is to our benefit to work out the best way to respond to that call, before we fall into error and misguidance.