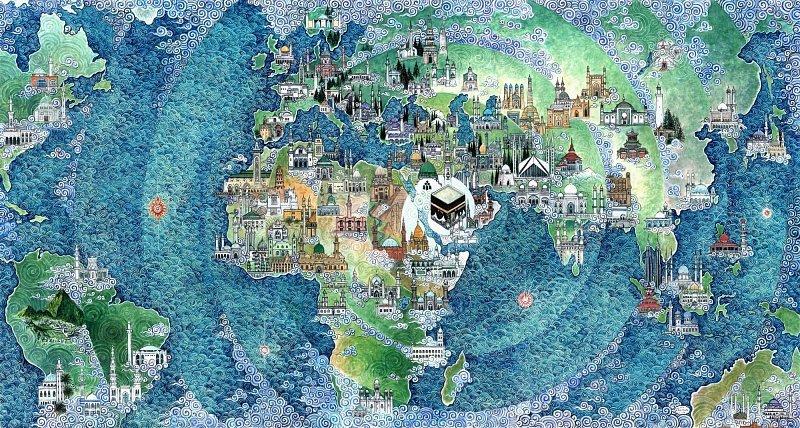 THREE hundred million Muslims – one-fifth of the Ummah’s population – live as minorities today. The challenges they face in an increasingly hostile world are largely incomprehensible to those living in Muslim majority countries. To be clear, each country differs in its politics, and it would be incorrect to assume that hostility exists in every country.

Nevertheless, one cannot ignore the developing world events and the pressure they are exerting on Muslim minorities. The French ban on burqa and the American aversion to anything ‘Muslim’ are strong indicators of that.

Indeed, some may argue that this is the world Muslims have created for themselves. That the small minority of Muslims accused of violence is responsible for the worldwide hatred and prejudice against Islam. It does not seem to matter, however, that the cause may actually be the propaganda against Islam to justify occupation and war.

Other right-wing experts fear a ‘hidden Muslim agenda’ to impose ‘shariah‘ in the West.

Whatever may be the cause of the current Islamophobia, the result borne out is the same. [Also read: How To Be A Strong Muslim In Today’s World]

But it’s not non-Muslim countries I want to focus on, I want to question the Muslim World: What have we done for the Muslims?

Fifty seven Muslim countries – making up one-third of the world – exist, yet our brethren-in-faith have to go through humiliation to preserve their identity!

How many Muslim countries has come forward to welcome Muslim immigrants and refugees? Are they not entitled to be governed by their own laws?

It is hypocritical to condemn France while we ourselves extend no helping hand to the Muslims living there. Our foe Israel grew stronger with the power of Jewish immigration – aliyah, as it’s called in the Jewish religion. A Jew gets citizenship on arrival in Israel.

In Islam, we have Hijrah (migration to Muslim lands) – a fundamental tenet that is largely unrecognized by the Muslim World today. Yet, with the intention of Hijrah, thousands of Muslims live and work in the Middle East so they need not be ashamed of their Muslim identity, and so they can practice their faith freely.

The Middle East offers both benefits – Islamic environment and good employment opportunities. However, foreign workers never know when they will be sent back, because immigration is virtually non-existent in these countries.

Online forums on Hijrah have hundreds of members from all over the world seeking help and advice on immigration to Muslim lands.

The world has changed for Muslims after 9/11. Hate crimes and diatribes against them have increased significantly. They are gripped with feelings of uncertainty.

Hijrah is the solution to several problems the Muslim World faces. This means we must work on special provisions and laws for Muslim immigration. Everyone seems to understand that we are one community, except for the Muslim World itself, which unnecessarily is clinging on to nationalistic fervors based on race and ethnicity.

Frustrated with the utter lack of this important sentiment on Hijrah, I directed pressing questions a few years ago to the Organization of Islamic Conference (OIC), which has a membership of 57 states, is the second-largest intergovernmental organization after the United Nations, and which claims that it is “the collective voice of the Muslim world ensuring to safeguard and protect the interests of the Muslim world.”

But the reply I received a couple of weeks later dwarfed the image of what the organization claims it stands for. The email said: “The OIC cannot comment on this issue because it is not on its agenda or within its charter and it is a sovereign issue of the member states.”

The OIC cannot be blamed as its boundaries of influence have been set by Muslim countries. The OIC is genuinely limited. It “cannot discuss an issue unless the member states want to,” I was told.

Today’s Muslim countries may not be enthusiastic about easing Muslim immigration. A prime concern may be that migrants will exhaust a country’s resources and rob the wealth of the “indigenous”.

But Hijrah should not be looked at solely from a materialistic perspective. Helping Muslim minorities is a collective responsibility of the Ummah, which will ultimately strengthen the Muslim World and may unite it for common goals. Yes, sacrifices will be required, but the ultimate good that will emanate will far surpass any adverse outcome.

Muslim migration, as is well-known, began with Prophet Muhammad ﷺ himself (from Makkah to Madinah). The migration transformed an impoverished town into the capital of the Islamic Caliphate that touched Europe to its West and Indus Valley to its East.

Even from a materialistic perspective, “the depletion of resources” is a myth. The greatest resource for any country is human capital, and immigration brings over diversely skilled human resources.

In recent history, tens of thousands of Muslims migrated to Pakistan when it separated from India in 1947. From an economic perspective, what the migration achieved is quite noteworthy. The majority of migrants, among whom were highly-educated technocrats, settled in Karachi – making the city a melting pot of all Pakistani culture. The diverse skill available in this multi-ethnic city contributed to making it the economic hub of Pakistan. Today, over 65 percent of Pakistan’s economy is generated by Karachi.

Silicon Valley – the most inventive place on earth – could not have been what it is without immigrants. According to research published by Business Week in February 2009, more than half of Silicon Valley start-ups were founded by immigrants over the last decade.

The problem with the Muslim World is a lack of strong faith. We are enveloped in an inferiority complex and divided into sects. Which nation can succeed if it doesn’t believe in itself and its principles?

Solutions are achievable. But Muslim leaders and masses must unite upon the core beliefs taught by Prophet Muhammad ﷺ and must have a strong conviction in their identity as one nation. We only have to look back at our history for that faith. With Islam, Muslims built one of the finest civilizations the world has ever seen.  [Also read: What United Them Will Unite Us]

Imagine what would have happened if there had been one well-governed Muslim country that had worked on these lines and had embraced Hijrah.

Natural resources – abundant in most Muslim countries – coupled with skilled human resources from around the world might have easily transformed that nation into one of the superpowers of the world!

Leaders, Hijrah is the way to go!