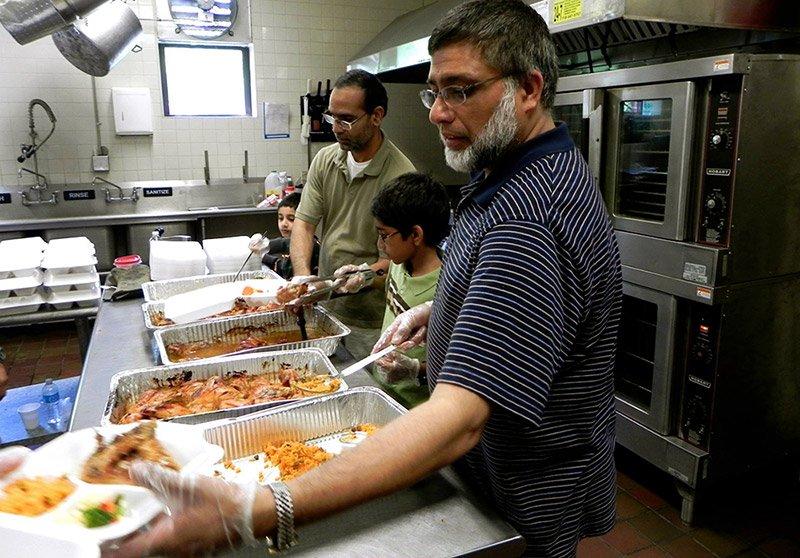 MUSLIM-RUN food charities are a fairly recent phenomenon in the West, and although not as well publicised in the mainstream media as the ‘more newsworthy’ activities attributed to Muslims, they are received with gratitude in the communities they serve.

Most people associate hunger and food deprivation with less prosperous societies, but hunger is not a new phenomenon in ‘first world’ communities. Economic turmoil in recent years leading to widespread unemployment, bankruptcies and foreclosures have led to a situation where one out of every six people in the United States is below the poverty line. The number of people predicted to turn to food banks in Britain next year rather than starve could reach a million, according to news reports.

As American Muslims For Hunger Relief (AMFHR), a charity that collects and distributes food for the needy, states in its mission statement:

“Prophet Muhammad is reported to have said, “He is not a Muslim who goes to bed satiated while his neighbour goes hungry”. So how can we as Muslims sleep contentedly while in our own neighbourhoods and in our own backyards, in our own towns and counties and state and country, our neighbours go hungry? And if we do so, then in light of the above Hadith, can we call ourselves Muslim?”

The Islamic Society of Britain began helping fund a weekly Peace Centre food bank  last year in a deprived part of Leicester, where “More than 90% of the people coming along are white, non-Muslim,” says project co-ordinator Salma Ravat in The Guardian.

Agencies like Sadaqa Food Bank in Ottawa and Halal Food Bank in Melbourne, and no doubt many others, are coming up to address the needs of Muslims and non-Muslims alike. Typically, food aid agencies offer services like food box programs, soup kitchens run in Islamic centers and mosques and food banks where guests are given enough food supplies to suffice for a week, depending on family-size. Food and drinks for distribution at Al-Mizan Trust, UK.

Feeding the needy in Islam

Muslim-run services like these are long overdue, given the great emphasis Islam lays on feeding the hungry and indigent. In fact, feeding the hungry is legislated as expiation for some acts such as breaking an oath, or in exchange for exempting one from obligatory acts of worship such as fasting during Ramadan.

Several chapters in the Qur’an mention the great virtue and reward of feeding those in need. In Surah Al-Balad, while describing  al-‘Aqabah — a virtuous higher moral ground, which is as hard to negotiate as a steep or difficult path, the Qur’an says:

“And what would make you conceive what is that steep uphill road ? [It is], the freeing of a slave or the feeding on a day of hunger an orphan relative or a needy person lying in the dust …” (90:12-16)

Similarly, while describing righteous people in Surah Al-Insan, it says:

“And they are those who give food – in spite of their own need , to the needy, and the orphan,  and the captive, [saying in their hearts], ‘We only feed you for the sake of God, and we desire nothing in return from you, not even a word of thanks'”  (76:8-9).

In Surah Al-Muddaththir, the dwellers of Paradise ask the people of the Hellfire: “What has brought you to this burning abode? They will answer, ‘We were not amongst those who worshipped God (out of arrogance) and nor did we feed the needy….’” (74:42-44)

And again in Surah Al-Ma’oon, “Have you seen the one who denies the [Day of ] Judgement? Then such is he who repulses the orphan and encourages not the feeding of the needy …….” (107:1-3)

According to Abdullah ibn Salam, may Allah be pleased with him, a prominent Jewish leader who accepted Islam on the day of the Prophet’s arrival in Madinah: “When the Prophet ﷺ‎ arrived for the first time in Madinah, I went with everyone to see him. When I saw him, I knew his face was not that of a liar. The first words he said were, “O people, feed the hungry, spread Salam (greeting of peace), maintain your kin relationships, and pray at night while others are asleep. With this, you shall enter Heaven in peace.”  (Al-Bukhari) The early generations of Muslims considered feeding people — whether a hungry poor person or a righteous Muslim — an act of worship like any other. During the days of the Islamic caliphate, which has been called the world’s first major welfare state by some contemporary sociologists, the government stockpiled food supplies in every region in case a disaster or famine occurred.

The second Caliph Umar, may Allah be pleased with him,  introduced a system of social security “that included unemployment insurance, which did not appear in the Western world until the 19th century. Whenever citizens were injured or lost their ability to work, it became the state’s responsibility to make sure that their minimum needs were met, with the unemployed and their families receiving an allowance from the public treasury.

During the great famine of 18 AH (638 CE), Umar may Allah be pleased with him, introduced food rationing using coupons, which were given to those in need and could be exchanged for wheat and flour. Another innovative concept that was introduced was that of a poverty threshold, with efforts made to ensure a minimum standard of living, making sure that no citizen across the empire would suffer from hunger. In order to determine the poverty line, Umar, may Allah be pleased with him, ordered an experiment to test how many seers of flour would be required to feed a person for a month. He found that 25 seers of flour could feed 30 people, and so he concluded that 50 seers of flour would be sufficient to feed a person for a month. As a result, he ordered that the poor each receive a food ration of fifty seers of flour per month. In addition, the poor and disabled were guaranteed cash stipends. However, in order to avoid some citizens taking advantage of government services, “begging and laziness were not tolerated” and “those who received government benefits were expected to be contributing members in the community.”

Feeding the poor is still a custom in many Muslim countries such as Egypt, famed for its ‘Maa’idat ar-Rahman’ (Tables of the Beneficent), going back to the era of Prince Ahmed Ibn Tulun (880 AH/1475 C.E.), who personally opened the first such table in the fourth year of his reign and encouraged the rich to offer food to help the poor. The tradition continued during the reign of Fatimid Caliph al-Muizz Li-Dinillah who established a daily  Ramadan dining-spread for the congregation of the ‘Amr bin ‘As Mosque to break their fasts: 1100 pots of different foods would be sent from his palace daily to be distributed amongst the poor.

Muslim-run food aid agencies are a heartening sign of the revival of the Islamic spirit of empathy and charity among Muslims. May the phenomenon spread across the globe so that no one faces the fear of going hungry ever again!