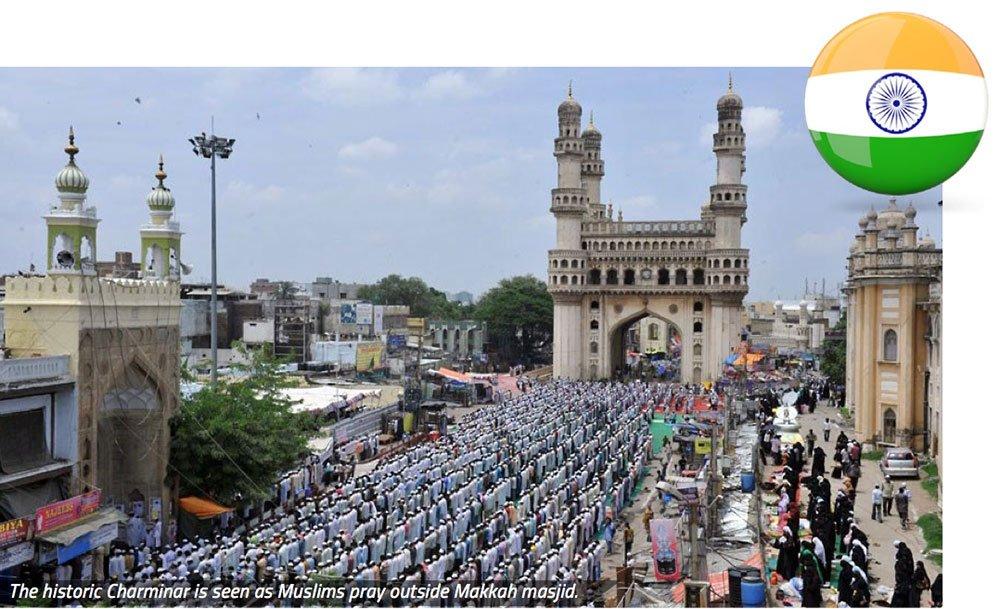 HYDERABAD, INDIA – Ramadan Around the World

RAMADAN in Hyderabad, India, ranks among the most festive times of the year. The homes and the streets are filled with a hustle and bustle that is different from the usual grind of daily life. Ramadan there has a flair that is lively in the evenings and quiet and almost lulled during the day. In fact, most shops and restaurants close during the day, only to open a few hours before the Iftar (fast-breaking) time. In Hyderabad, men and women have distinct roles. While men spend their days visiting the Masjid for each of the five prayers, the Taraweeh prayer and even spending a few nights in I’tikaaf (to seclude oneself in the Mosque with the pure intention of worship), women spend their time in worship within the confines of their homes; they are busy cooking the special Iftar, Suhoor (pre-dawn meal), and dinner meals, in addition to extra care they spend preparing for the upcoming Eid festivities. Ironically, though Ramadan is about abstaining from food and drink during the day, much of the day could be spent preparing meals and making accommodations for the Eid celebration, which includes grand feasts of elaborate dishes and sweets. Actually, in some households, preparations for the Eid festivities begin with the start of the month.

Women begin preparing the meals and the clothing for Eid even as Ramadan has just begun. Part of this is because of an old tradition, when resources were scarce and needed to be stockpiled, and part of it is just sheer excitement of an upcoming blessed holiday. Women and girls may spend a great deal of time deciding what they will wear for Eid, gathering cloth, jewelry, etc., in anticipation of the big day. Also, the three-day Eid festivities require a great deal of food, especially when one intends to feed extended family and friends, and send food and sweets to neighbors (as is the custom in Hyderabad) .Therefore, many households in Hyderabad bustle with cooking and cleaning processes all month long, not just from the day-to-day meal preparations, but from the upcoming Eid celebration that could be nearly weeks away. But let not the Hyderabadi’s appreciation for good food and dress fool you; their worship and dedication are just as energetic and vibrant as their biryani (a rice pilaf). In Hyderabad, culture plays a large role in how Ramadan is spent. Many men will spend the end of the month traveling from one local Masjid to another, ensuring that they witness and participate in as many Taraweeh prayers as possible. So, as each Masjid is ending its Quran recitation and Taraweeh, a man will attend that Masjid and over the course of a week, he will have participated in multiple Khatem-e-Qurans (end of the Quran recitations). This is significant and very meaningful for Hyderabadis (and a tradition that continues for many even in America).

As far as the younger generation of Hyderabadis goes, the gender gap remains. Mostly young men attend Masjid and young women stay at home. However, during the Eid prayer, the youngest girls are permitted to go to the prayer, as well. During the festivities after the prayer, though, the entire family participates and the three days of Eid are spent feasting on foods like biryani and sheerkorma (sweet milk with vermicelli).

As it should be, the primary focus for all Muslims in Ramadan is worship, including prayer and fasting. Interestingly, one Hyderabadi now living in America remarked that a true Hyderabadi, be he “good or bad, rich or poor, will always fast and will always go to Friday prayer. That is something that we are taught to do and that is something that everyone will do, no matter what else they do that is wrong or bad.” Charity is also something that Hyderabadis seem to honor and uphold. Apparently, according to some accounts, shopkeepers actually make and keep clothing and other articles specifically intended as charity for the needy. During the last days of Ramadan, the shopkeepers distribute the clothing in front of their shops for free to the needy as Eid gifts (as a form of charity). These acts of worship (charity, prayer, fasting) during Ramadan are what keep the blessings of this holy month flowing. Let us all remember to share the joys of Ramadan with our own neighbors and friends.