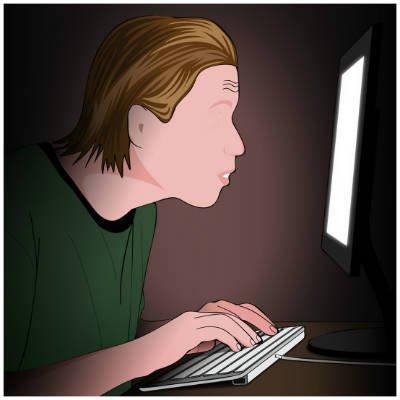 Muslims are spending a great deal of their time online – according to Professor Gary Bunt, author of ‘Virtually Islamic’ and ‘Islam in the Digital Age’, there are over a 100 million Muslims online globally – and the line between ‘real’ and ‘virtual’ life is getting blurred for many.

What brings Muslims online, besides the need for communication? The Internet has plenty to offer: Islamic resources in the form of books and lectures; beneficial websites featuring articles, live interaction with counselors and scholars; a reference database of fatwas and sermons; internet forums, matrimonial sites and social networking sites that provide a semblance of ‘social life’ to the socially restricted; blogs which allow people to indulge in various pursuits – from sharing beneficial knowledge and showcasing one’s writing skills and daily life, to social activism to unabashed self-indulgence.

On the darker side, there are the well-known perils of pornography; sick criminals preying on unsuspecting youngsters and vulnerable women; free-mixing leading to extra-marital relationships, rabid extremism and deviancy leading to the dreaded phenomenon of “cyber-jihad.”

Besides these obvious and major harms, Muslims who use the internet a great deal may develop certain other patterns of behavior that may be insidious, but are no less harmful from the spiritual point of view.

How many times do we find ourselves getting online with the intention to quickly check on our e-mail, and wind up hopping from one website to another, only to glance at the clock and discover that several hours have gone by? Speaking about the habits of the early Muslims, Al-Hasan Al-Basri, may Allah have mercy upon him, said, “I saw those people (the early Muslims) and how they were more careful about their time than about their Dirhams and Dinars (i.e. their money).”

There are several ways we can safeguard our time online – if we are past the stage of dragging ourselves off the computer within a reasonable amount of time, we could always get people to remind us to get up after a certain period of time or even set an alarm (there are services available online).

Looking up obscene content, chatting suggestively and flirting with members of the opposite gender are just a few obvious examples of un-Islamic behavior. Other, more subtle, but equally dangerous lapses of Adab (good manners) include taking advantage of anonymity on the internet to slander and tarnish people’s reputation, verbal harassment, unprovoked rudeness, sarcasm and condescending behavior.

Recently, while listening to a lecture on Adab Shar’iyyah, based on a poem called Mandhumat Al-Adab, codifying Islamic behavior based on Islamic jurisprudence (written by a Hanbali scholar called Ibn Al-Qawi in the 13th century), I was struck by the lecturer’s explanation of Adab as: “A science that teaches one how to behave internally and externally; how to react inside when some good comes, or some calamity befalls, and how to react externally when faced with trials, tribulations… this science tames the soul and keeps it in balance and firm like a lofty mountain firmly rooted in the earth, unshaken by earthquakes of whatever magnitude.”

This is certainly food for thought for most of us, who discard good manners at the first sign of temptation and (real or perceived) intellectual intimidation.

It’s tough to resist talking in vain on the internet when there are so many cues everywhere encouraging one to leave comments and get into discussions (that more often than not regress into diatribes). Two verses of the Qur’an are especially meaningful in this context:

“Indeed, successful are the Believers, those who in their prayer have Khushu’ (fear of Allah) and those who refrain from vain talk.” (Qur’an, 23 : 1-3)

While surfing social networking sites, one comes to the conclusion that they give rise to a culture of banality and lead to trivializing sins. Why else would Muslims put up pictures of themselves indulging in blatantly un-Islamic activities, if they were not under the (mistaken) impression that it was “cool” to do so? Why else would people congratulate them and positively encourage them in their antics?

[Also read: Why Families Should Spend Quality Time At Home]

These may seem like minor issues when compared to the situation of the majority of Muslims today, but the Prophet (peace be upon him) warned us against belittling sins – even minor ones – in his Farewell Sermon: “Satan despairs that he should ever be worshipped (or obeyed by means of leading people to associate partners with Allah in obedience) in this land, but he is pleased that he is able to lead you astray through your small misdeeds, so be aware of him for the sake of your religion.”

Abdullah Bin Mas’ud (may Allah be pleased with him) used to say, “A believer treats a sin as if it is a mountain over his head that may fall on him any moment. Whereas a habitual sinner looks at it as a fly that perches on his nose and he waves it away with his hand.” (Bukhari)